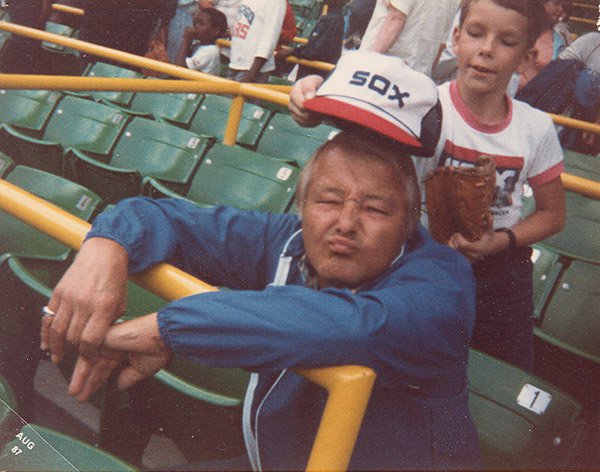 In 1931 Dad was born. It’s crazy to think it was 81 years ago today. Even though it has been six years since he passed away, it has been a very long time coming for me to not only forgive him for the pains he caused me (what parents haven’t?) and to give him credit for all the good he did for me.

When people wrong us, it is so hard to look past that and give them credit for the good they do. To protect our feelings and make us feel better, it is just easier to make the other person out to be the bad guy. Then it would just be so unfair to us to give that person the credit he / she deserves. A few months ago I had a change of heart. A certain great sensation came over me. It took the passing of a good friend’s father to help me feel love instead of pain.

Death is inevitable. If it did not happen in 1992 and 2006 for Mom and eventually Dad, it would have happened some time or another. Their time had come and gone. It is very possible that Wendy, Laura, and I had a grand plan to go through this suffering with the loss of Dad in 2006. The whole point might be to test us and see how we will take things. I cannot speak for my sisters. I know that it took me almost six years to have a change of heart with how I took things.

Now that I have stopped focusing on how losing Mom and Dad has negatively impacted my life, I can focus on how I was blessed for the years that I had them. I always gave Mom credit for all the good things she did for me; it was just so much easier. However, I almost never gave Dad much credit. Let’s start turning things around.

Dad worked a crappy job. He was a garbage man for the City of Chicago. Go ahead; make fun of him. What a bum. He quit school in the 10th grade. He was “smarter” than the teachers. However, the guy worked outside five days a week. In Chicago, that could be anything from hot, humid days, to getting soaked in the pouring rain, to freezing his butt off in a blizzard. He almost never skipped work. In fact, neither do I. He instilled a great work ethic in me without even saying a word. I really appreciate the hard work he did for our family!

Dad was not mister personality when it came to having warm, loving relationships. In fact, I have also picked up facets of this personality trait of his. It has negatively impacted many relationships where fights ensued when I did not know how to properly communicate my loving thoughts during tense moments. However, Dad was very direct and to the point when necessary. Although there needs to be a healthy balance of being direct when necessary while being warm and loving, Mom gave me the latter of the two.

For 13 years I went to private Catholic schooling. Instead of shipping Laura and me to public school, Mom and Dad ensured that we could get a quality education in a healthy environment. I’m sure things haven’t changed much since, but back then the public schools were not so good. The threat if I did not do well in school was that they would send me to the public school.

Think about all the money that went towards Laura’s and my schooling. That is money that could have gone towards house repairs, a new car, vacations, or other material goods for Mom and Dad. They never went on any vacations alone without Laura and me. Even though I am no longer a practicing Catholic, I am extremely grateful for the benefits of going to a parochial school. Now that I have started up again with my Christian beliefs, I can think back and count my blessings of being immersed in a Christian setting while attending school. 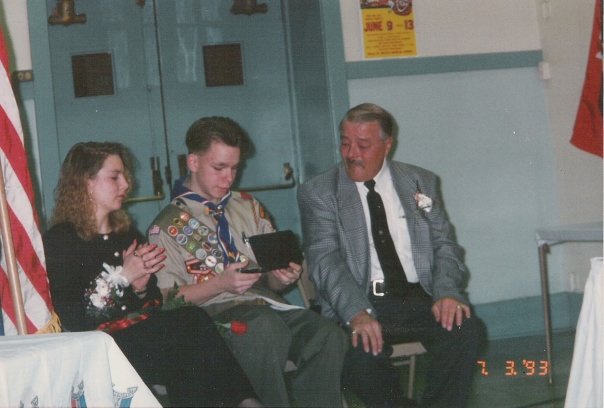 On Friday, December 12, 1992, I passed my Eagle Scout Board of Review. I had finally made it! Not long after, Tuesday, December 15, 1992 rolled around. That was possibly the most pivotal day in my life. Mom had passed away. Now that I am older, I can look back with positivity and see how it was a blessing that Mom hung on to see her only son attain the rank of Eagle Scout, even if it were for three days!

Let’s fast forward to Sunday, March 7, 1993. Above you can see Laura, Dad, and me during my Eagle Scout Court of Honor. I remember that day being so happy. Dad kept crying. I remember telling Laura so many times that I wished Dad would stop crying. Again, now that I am older and wiser, I can clearly understand that those were tears of joy for me. My Dad was proud of his son. I had accomplished something at the age of 15 that he probably could have never done when he was younger.

Even when I was younger I understood that not every lesson is a direct and clear one. Sometimes we learn what not to do. Sometimes people suffer so that we do not have to. Dad smoked cigarettes. I hated the smell, the cost, and the damage it did to all our lives. I know to never touch them. Dad worked crappy jobs. Even though I have had some jobs that I did not enjoy, I learned from him to not work yourself crazy for bread crumbs. I now work for one of the most important companies across the Internet doing a job that I love with the type of pay I would have not imagined!

I never was homeless or otherwise evicted. The heat was always on in the winter. We always had food. I always had the clothes I needed. I got to go on fun trips. I was given a good education. I had the toys I wanted. I got to be involved in the activities I chose. I got to use his car a lot. I got to go on many camping trips with the Boy Scouts; he even went with me on some!

The guy was not there in many ways that I would have liked. However, he was there where it counted in so many other ways. He was a provider. Although it’s not best to stop with just that. When you take down the resentment for not getting everything I wanted from him, I am able to look back and see the many things that I did get from him.

Mostly due to resentment from not always getting what I wanted from him, it was natural to dislike a lot of the things he liked. Dad was all into the big band music. Due to Mom’s Polish heritage, Dad loved Polish polka music! Even though he didn’t know a word of Polish, he still tried to sing along. His choice in TV shows and movies was usually the classics. I was young. I wanted to listen to pop / rock music and watch all the newer TV shows and movies.

It’s natural to come full circle and follow in the footsteps of your parents. I now love older stuff. I really have a huge nostalgic streak in me. I love older stuff, such as architecture, film, and music. I embrace it alongside all the contemporary works. You really have to give value to things from the past. You can learn from what worked and what did not. Plus, you can usually predict the future by looking at the past.

Yes, it sucks not having Dad here with me. I do know that I was loved by him. If there is an afterlife, I cannot wait to see him again! I know he will be so proud of all my accomplishments I have attained and those that are still yet to come!

Dad, happy birthday! I love you and miss you very much!