This is a follow-up to We are Afraid to Do What is Right. Tonight I was listening to a talk at Church. I really do not remember what the immediate subject was, but I was thinking along the lines of my last post. I was thinking how when people get mad at someone else for doing something that was bothering them, they usually say something like, “I’m gonna give him a peace of my mind!” If these people follow through, usually an argument or sometimes even a fist-fight is the result.

We know this happens all too often. Most of the things I discussed in my last post were about us having the fear to say what we really want to say deep down inside. This reminds me of when I was going to school for an education degree and I had to take a behavior modification class. This one story / analogy sticks out so strongly and will never escape my memory.

We all have been in the store where we see kids asking parents for candy, a toy, or some other special treat. Sometimes the parents give in right away. Sometimes the parents say no. In certain situations, the kids may start making a scene in an effort to get what they want. Eventually the parents either give in to avoid any chaos or get caught in the trap of anger.

One of the best ways to avoid this situation altogether is to proactively set rules and resulting consequences for when those rules are broken. When you go into the store, set the expectation that you are going there to buy A, B, and C. Good behavior will be rewarded accordingly. That way, when your kid wants you to buy D, you can reiterate that you are there to buy just A, B, and C. Acting inappropriately would result in not earning your kid’s reward. Respecting his / her agency to do the right thing is the best thing you can do.

If you do not take the time to set these rules beforehand, you do not have a plan should there be a problem. Many times kids will just keep pushing harder and harder to get what they want. Once you give in, they will know your breaking point. They know eventually you will give in again. They would rather put up with you being upset and get their “reward” instead of getting nothing and honoring your request. It is not because kids are inherently bad; they are simply testing the waters, as kids naturally do.

Of course, certain things just happen so quickly before we can chose the proper or best-fitting course of action. Please take a moment to watch this awesome video.

In this powerful story, Chris Williams shares how he already decided ahead of time how he would react or act in certain situations. Of course we are not psychic, but we can at least plan ahead in a general sense. If someone bumps his / her shopping cart into me in a store, I would chose to keep calm. Most likely the other person will apologize, and we could be on our way. Had I not planned my general way of being, I would have most likely started yelling, swearing, and blaming the other person. That fist-fight might even break out!

Chris has lost his entire family. What would most of us have done? Look deep inside yourself. Could you honestly act the way he did? Think about what could have happened. Chris could have been resentful and hateful towards the young man driving the other car. He would then have to carry around that pain. 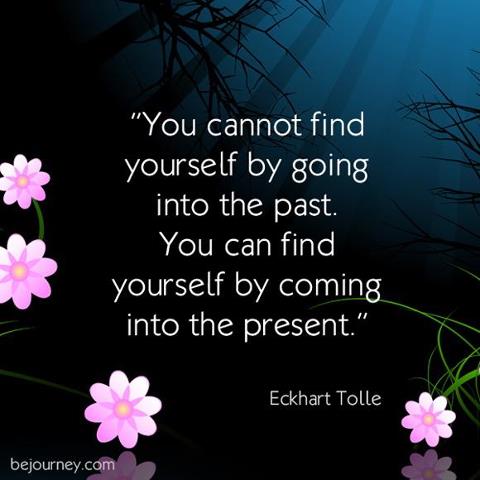 Of all the lessons I have learned in life, one of the most important is learning to let go of the past. There is not a thing I can do to change what has already happened. If I break the screen on my phone, I have two logical options. I could either deal with the messed-up screen or get a replacement screen. No magic wand will go back and undo that damage. The quicker I let go of the pain, the quicker I can allow myself to resolve the problem. My old ways of screaming and swearing never got my problems resolved any quicker.

I began this post with a less-optimal result of an undesired situation. Again, we crave peace, connection with others, and happiness. Of course, conflict makes us unhappy. For some reason many of us resort to what in the moment seems the easier way out. The results are almost never good.

Let us imagine another scenario. I know I need to leave home by 5:40 AM if I want to get to work on time without running last minute. I might start driving faster than normal in an effort to not be late to work if I had left a few minutes late one morning. This happens to be the day that I get behind someone driving a few miles per hour under the speed limit. So many of us might get angry inside and even start venting our frustrations. In the unhealthiest of situations, road-rage is the result.

Maybe this guy was recently in an accident and wants to drive a little slower just to be safer. Maybe he just got pulled over for speeding the other day and wants to avoid another ticket. Maybe his wife recently passed away and is just really mellowed out. To understand what I am getting at, I want you to look at this graphic from The Arbinger Institute. 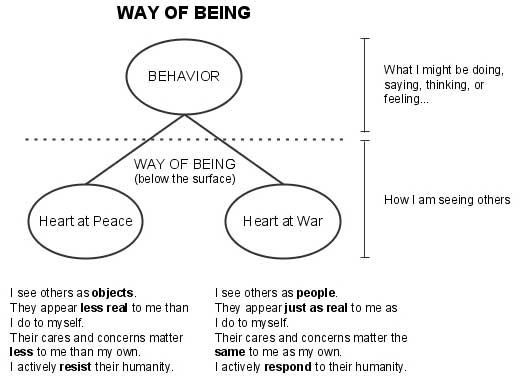 We all have feelings. We all have certain things that make us happy, scared, hurt, sad, and angry. We all can get emotional at times. We all have our good times and bad times. However, we usually get so wrapped up in what is on our mind that we fail to pay any attention to our fellow man’s needs.

No one is saying you have to go over to this guy’s house, cook his dinner, do his laundry, and mow his lawn. Just treat him how you wish a stranger would treat you. This is not just some self-help garbage that someone is just trying to shove down your throat. As I have discussed previously, we just get caught up acting how we see others instead of following our heart.

Next time someone says something to you that really ticks you off, stop and think about things before “give[ing] him a peace of [your] mind.” Having a bad day gives no one the right to say hurtful things to you, although you still can chose to be empathetic. Maybe this person just did not know how to get the point across without sounding hurtful. Maybe this person has no idea that he hurt your feelings or angered you. Is this really worth fighting over? Can this be resolved in a more peaceful manner?

Flip things around. Next time someone does something that really gets your blood boiling, try to take a moment to think about what best to say. Try to imagine various scenarios where this person upset you by accident. Also try to consider that this person just does not know any better. If that is the case, maybe you could instead offer to help this person improve himself in some way.

Ultimately, we all want peace, love, respect, and happiness; you are lying to yourself if you can find any way to disagree with me. If this is really what you want, do what you can to avoid veering off your path. Do what you need to do to speak from your heart and truly “give[ing] him a peace of [your] mind.”